3D
360°
6,209 views 711 downloads
15 collections
Community Prints Add your picture
Be the first to share a picture of this printed object
0 comments

We continue The Ancient Ruins Collection--Mesoamerica, a dedicated subcollection to the legacy of past civilizations.

The "Templo Mayor" (Spanish for Great Temple) was the largest and most important building in the ancient city of Tenochtitlan, which today is Mexico City.

Tenochtitlan was the capital of the Mexica (Aztec) Empire, a magnificent city built on islets on Lake Texcoco, in the Anahuac basin in central Mexico. At the time of the arrival of the Spanish in 1519, it was more populous than London.

This model contains only the hypothetical reconstruction based on several accounts by first Spanish witnesses and cronicles. No ruins model is provided as the remains today are mostly unrecognizable, the pyramid being razed to the ground by Conquistadors.

The Temple was called Huēy Teōcalli (Great Temple) in the Nahuatl language. It dedicated simultaneously to Huitzilopochtli, god of war and the sun (right), and Tlaloc, god of rain and agriculture (left), each of which had a shrine at the top of the pyramid with separate staircases. It was built in the exact location where Mexica legend says an eagle devoured a snake atop a nopal cactus, marking the location mandated by Huitzilopochtil to found their city (an illustration of this legend appears today in the Flag of Mexico).

The pyramid measured approximately 100 by 80 m (328 by 262 ft) at its base. It was built and enlarged 6 times, beginning sometime after 1325, and destroyed by the Spanish in 1521 to make way for the new Catholic cathedral.

The recounts of Fray Bernardino de Sahagún, a Spanish monk describe braziers with sacred fires burning continuously in front of each shrine, and tall staircases with balustrades ending in snake heads. The whole building was covered in stucco and polychrome paint.

As mentioned before, this pyramid was the main building of the Sacred Precinct, a walled citadel within the city of Tenochtitlan reserved for temples, palaces, and other religious, government, military and education important buildings. All of these were razed and the Spanish-founded Mexico City was built on top, in European style, reusing the materials.

The location of the temple was forgotten until the 20th Century, when excavations slowly brought the remains back to light. A carved, circular stone depicting dismembered goddess Coyolxauhqui was found in 1978 in front of what used to be the staircase leading up to the temple of Huitzilopochtli (right shrine). It was up there where human sacrifices were conducted and bodies tossed rolling down the stairs to land dismembered exactly where the goddess did, recreating the myth of the birth of Huitzilopochtli and his victory over her envious sister Coyolhauhqui. In 1987, the Museum of the Templo Mayor opened to house all the findings (from Wikipedia).

MiniWorld 3D is excited to bring this historical model to life as a homage to all the people of Mexico. This model was designed by founder Dany Sánchez, from scratch. Please give credit, it's all about spreading culture and education!

3D prints in Plasticz Netherlands metallic grey, 0.2mm.
Hand painted models in acrylics by Dany Sánchez - except for one photo (that doesn't look like the rest), printed by Emanuel Arana and hand painted by Nikki Mele Crafts.

Easy print, no supports, brims or rafts required. Use best quality or larger scales for all details to show up better. 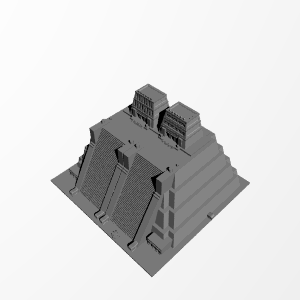