3D
13,840 views 467 downloads
9 collections
Community Prints Add your picture
Be the first to share a picture of this printed object
0 comments

Terminators are Space Marine Veterans who have earned the right to wear Tactical Dreadnought Armour, better known as Terminator Armour, and serve as their Chapter's greatest infantry assets, each essentially serving as a walking tank. Tactical Dreadnought Armor combines the technological developments of Power Armour with the sealed environmental suits designed for starship crews that work in highly unstable or corrosive environments such as inside the high pressure casings of plasma reactor shields. It can even withstand the colossal impact of high speed orbital micro debris. Terminators are always members of the elite 1st Company of a Codex Astartes-compliant Space Marine Chapter. All suits of Terminator Armour have built-in teleportation devices which allow them to deploy anywhere via deep strike, although more often they are deployed using Land Raiders. Terminator Squads consist of a Terminator Sergeant and between 4 and 9 Terminators. 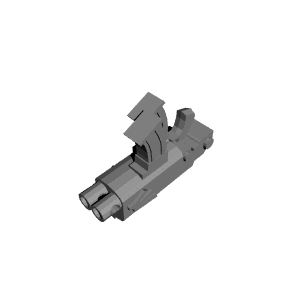