3D
360°
3,003 views 350 downloads
7 collections
Community Prints Add your picture
Be the first to share a picture of this printed object
0 comments

A re-mix of Bowser and Gamera.

Bowser, sometimes known as King Koopa (Japanese: 大魔王クッパ, Daimaō Kuppa, which translates into "Great Demon King Koopa" or "Great Sorcerer King Koopa," the latter being used in the manual of Super Mario Bros.[1]), is a major character and the main antagonist of the Mario franchise. He is a large, powerful, fire-breathing Koopa who leads the Koopa Troop, an antagonistic organization of turtle-like creatures, and has been the archenemy of Mario since his debut in Super Mario Bros. He has repeatedly kidnapped or attempted to kidnap Princess Peach with the ultimate goal of defeating Mario and taking over the Mushroom Kingdom. Bowser's defining traits are his monstrous appearance, full-throated roar, fire-breathing abilities, cruel personality, and never-ending conflict with Mario and unrequited crush for Peach.

In his first onscreen appearance, Gamera was an ancient creature disturbed from his rest inside an iceberg by a nuclear blast. Gamera came to Japan and rampaged across the nation, but was trapped inside a rocket and launched into space. In the next film, Gamera vs. Barugon, after the rocket carrying him was struck by a meteorite, Gamera returned to Earth, where he battled the monster Barugon. This quickly established Gamera as the lesser of two evils compared to the other monsters that would frequently menace Japan, such as Gyaos, Jiger and Zigra. Gamera would return several times to fend off these creatures, be they ancient reawakened evils or extraterrestrial invaders. He also developed a strong affinity for the children of Earth, coming to their aid whenever they were placed in danger by other monsters or alien invaders. Eventually, Gamera was seen as a full-fledged hero and friend to the children of the world instead of a rampaging monster.

The Gamera series was rebooted in 1995 with Gamera: Guardian of the Universe. This time, Gamera was a guardian genetically engineered by the ancient civilization of Atlantis to defend the world from their previous creations: the man-eating flying monsters known as Gyaos. Gamera was able to keep the Gyaos under control, but the Atlantean civilization was completely destroyed in the struggle. Gamera remained sealed away inside a rocky atoll for thousands of years before rising again in the modern day to battle Gyaos, which had been reawakened by humanity's rampant pollution of the Earth. While the human race feared Gamera at first, they eventually joined his side to battle Gyaos and the extraterrestrial Legion creatures that arrived on Earth a year later. By 1999, Gyaos had begun to overrun the world, while an ancient demonic creature called Iris was awakened from its shrine by a vengeful young woman who blamed Gamera for her parents' deaths. To make matters worse, the destruction Gamera caused in his crusade against Gyaos led humanity to turn against him and deem him an enemy. In his darkest hour, Gamera was able to triumph over Iris and bring humanity back to his side, just in time to face an oncoming swarm of thousands of Gyaos.

Gamera's most recent onscreen appearance was the 2006 film Gamera the Brave. A standalone film, it told the story of a young boy named Toru who came upon a bizarre glowing egg on a small island, which hatched into a baby turtle he named Toto. As Toto grew and began demonstrating unusual abilities such as flight and the ability to spit fire, Toru realized that his pet was the reincarnation of Gamera, who sacrificed himself to kill a flock of Gyaos in 1973. Toto finally grew into the new Gamera just in time to confront Zedus, a man-eating reptilian sea monster that began terrorizing Japan.

Though a new film featuring Gamera has not formally been announced since the release of Gamera the Brave, the character was featured in a 2015 short film directed by Katsuhito Ishii, which was made to commemorate the character's 50th anniversary. Gamera has also made several appearances in non-film media such as comic books and manga, novels, and video games. 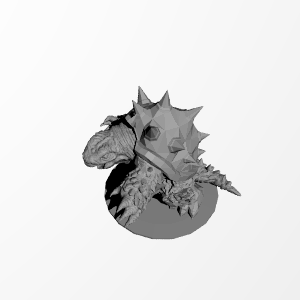 ×
7 collections where you can find Testudo by Lennyface