The Age of Maturity

3D
360°
Scan The World
1,699 views 148 downloads
2 collections
Community Prints Add your picture
Be the first to share a picture of this printed object
0 comments

The Age of Maturity

This piece made by Claudel lover and assistant of Rodin, was originally commissioned by the French State.
The woman learned and has been influenced in her art by the sculptor Rodin. Their intricate love story and relationship started when Camille became her student in 1884 and ended in 1898 when Rodin refused to marry her and she opened her own art studio.

The sculpture presents three naked figures with swirling drapes. It represents ageing or also a reflection of Camille and Rodin relationship: a woman on her knees who just released a hand of the second figure, a man being drawn away by an other woman embracing him. This can be seen as the man leaving youth and approaching maturity or as a reflection of the artist’s relationship with her lover and teacher Rodin. 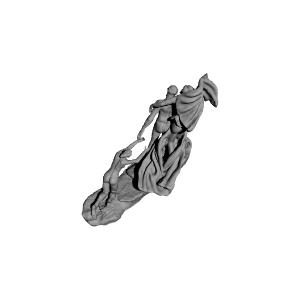