Les Nubiens dit aussi Les Chasseurs d’Alligators in French, is a high relief designed to be part of the façade of the anthropology gallery of the Natural History Museum in Paris.

The idea behind the project was to depict the human races and  for this, the sculptor chose to depict African people.

You can admire the precision of the details on the figures part of the relief. The crocodile scales and the prickles on the cacti are realized with naturalistic precision.

This high relief is an evocation of primitive times, times that go back to the colonial expeditions and this representation surely does not escape the stereotypes of the time. The piece is also a reference to an attraction which was popular during 1878, there Nubians wearing loincloths would represent some hunting scenes leaving the audience in a state of suspence. 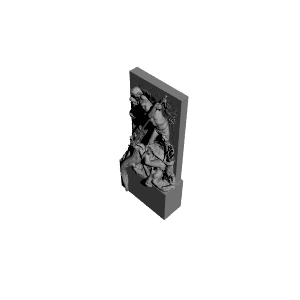 ×
6 collections where you can find The Alligator Hunters by Scan The World
×
Denis Labrecque
@denislabrecque
0
Printed on: ELEGOO Mars 2 Pro
Material: Resin
Posted at: 03rd November 2021

Beautiful print. Had to spend a good couple of hours adding small extra supports in Blender to avoid overhang. Came out lovely, with the exception of the falling lady's thigh, in which an overhang was forgotten. Hope to display this and the eagle hunt together in a frame. Let me know if you want the file with extra supports.