3D
Scan The World
2,412 views 78 downloads
1 collection
Community Prints Add your picture
Be the first to share a picture of this printed object
0 comments

Arnolfo di Cambio came to Florence after working in Rome, and became head architect for Florence Cathedral. His striking representation of the Annunciation is unusual in giving so much prominence to the building in the centre, with the dove of the Holy Spirit flying out of it. The original placement of this relief is unknown.

The relief was recorded in the middle of the eighteenth century as being in the cloister of the convent of Santa Maria Maggiore in Florence. At this time a small, later, figure of the standing Christ (removed shortly before acquisition) stood under the canopy at the centre.

The Annunciation, marble relief. On the left is the angel with a sceptre in his hand, in the centre is a canopied shrine with spiral columns, and on the right is the Virgin with her right hand on her breast. A dove appears under the canopy of the shrine.

The nose of the Virgin, the fingers of the Angel's right hand and the heel of his right foot are made up in plaster. 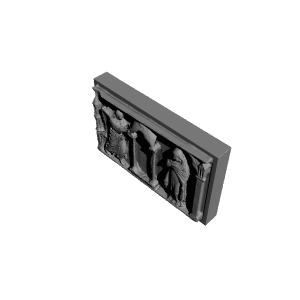 ×
1 collections where you can find The Annunciation by vam