3D
360°
Scan The World
1,709 views 122 downloads
4 collections
Community Prints Add your picture
Be the first to share a picture of this printed object
0 comments

Materials: Bronze, Enamel. Accession no: HCA 627. Current Location: The Hunt Museum, Limerick. The Antrim Cross is a bronze cross with five equal arms from the early 9th century. The cross has five pyramidal bosses each in the form of a truncated pyramid. The side of the pyramids are decorated with interlocking angular fields of yellow enamel, alternating with a similar-coloured design of an arrow within a truncated triangle. The pyramidal boss at the centre is taller and is decorated with an animal design. The flat tops of the bosses are decorated with small squares of millefiori enamel. Rivet-holes in the separately cast base-plate show that this cross was attached to a flat surface, perhaps that of a house-shaped reliquary. It is the only virtually intact example of its kind and period. More. 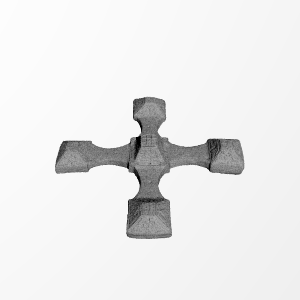 ×
4 collections where you can find The Antrim Cross by HuntMuseum