3D
Scan The World
3,353 views 157 downloads
1 collection
Community Prints Add your picture
Be the first to share a picture of this printed object
0 comments

This statue is thought to portray a girl participating in an open-air Dionysiac ritual, shown as she turns her head towards a tray for offerings resting on her arm. This beautifully executed sculpture was made by a Hellenistic workshop of the Asia Minor school, probably for dedication to Dionysus at a sanctuary. The work was re-used in the furnishings of the Imperial villa for decorative purposes.

Of the finest and most obviously Lysippan from the standpoint of composition is the marble figure known as the 'Girl of Anzio'. This figure was found in 1878 at Anzio in the remains of a villa of early Roman Imperial date. Althought it has sometimes been called an original, most scholars take it to be a high-quality Roman copy of what was probably a bronze original. It depicts a young woman holding a tray of sacrificial implements in her left hand. Presumably she is a priestess or a priestess's attendant. Because of the very smooth, youthful face, it is possible that the figure may represent the young Iphigeneia or one of her attendants, serving in her role as priestess of Aulis. The chief reason for placing the work in the Lysippan tradition is its spiral torsio, beginning from the right foot and revolving smoothly in a counter-clockwise direction toward the tray and head. Once again there is the familiar Lysippan spatial freedom, with its multiplication of important aspects. Recognizing a Lysippan quality in the work, Adolf Furtwangler in 1907 made the ingenious suggestion that the Anzio girl might be a work by one of the pupils of Lysippos which is mentioned in Pliny, the Epithyousa, 'Woman offering sacrifice', by the sculptor Phanis. This this statue should be the very work so obscurely mentioned by Pliny, however, seems to strain coincidence.

The date of the original, furthermore, has with good reason been thought to be too late for one of the direct pupils of Lysippos. Most estimates of the statue's date proceed from an assessment of its drapery. In most female figures of the Classical period drapery is subordinated to the structure of the body and arranged in harmonious parallel folds which serve to model the form of the body.  In the Anzio girl the drapery is massive and tends to be arranged in independent forms which conflict with and obscure the structure of the body. Her himation, for example, is wound up in a thick roll which is strung around her waist; the chiton is belted twice, once under the breasts and once around the waist, beneath the rolled himation, and a portion of it which has been pulled up over the belt falls down beneath the himation. The result is a series of independent dragery surfaces, each with its own pattern and mass. Some of this segmentation can also be found on the copies of the Tych of Antioch (see below), but in the Anzio girl the process seems carried a stage farther.

Putting all the evidence together, it seems most likely that the original of the Anzio girl dated from ca. 250 BC., and that it was a relatively late echo, if not a product of, the Lysippan school, which in other ways anticipated some of the features of Hellenistic baroque. 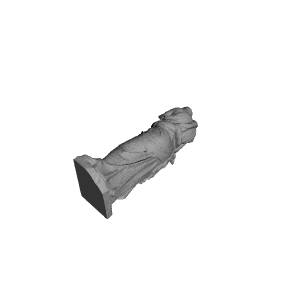