3D
360°
Scan The World
2,795 views 153 downloads
4 collections
Community Prints Add your picture
Be the first to share a picture of this printed object
0 comments

This figure, and the St Michael also in the V&A collection, probably came from a large pulpit or tomb. Different workshop assistants might have worked on each figure. The tubular folds on Gabriel’s robe were made with a ‘running drill’ technique: a series of holes was made with a drill, and the spaces between them removed.

These objects are of historical significance both because of their rarity and quality. Examples of Tuscan carving of this period outside Italy, especial ones which have formed part of a larger architectural scheme, are rare. The quality of carving displayed (as discussed in the Curator's notes) is also, in some parts, of very high quality. Being able to look at the objects as sparate entities enables the viewer to gain unique insight into the way they were carved. It is possible to see clearly the drill holes and carving techniques employed at the time. They are also important in trying to establish the cannon of Tuscan sculpture carving. Although they have been hotly debated since their arrival in the museum, with differing attributions, it is clear that they are connected to the workshop of Nicola Pisano and are useful in the discussion of the different hands in that workshop and its possible output. 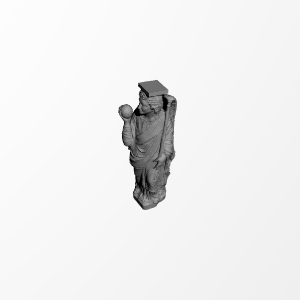