The archangels Michael And Gabriel

3D
Scan The World
3,485 views 220 downloads
Community Prints Add your picture
Be the first to share a picture of this printed object
0 comments

The archangels Michael And Gabriel

By the 1200s the cult of the Archangel Michael had spread across Europe. There were several mountain sanctuaries dedicated to him. One was at Monte Sant’Angelo on the Gargano Peninsula in south Italy. The Angel often appears trampling on the devil in the form of a dragon. He holds a spear in his raised right hand. This representation became very popular. Many sculptures of this type survive.

This St Michael has a companion figure in the V&A, the Archangel Gabriel (Museum no. 5800-1859). Some people think that these figures, with other sculptures now in Florence, Boston and Paris, were among the supports of the Arca (shrine) of St Dominic in San Domenico Maggiore in Bologna. Nicola Pisano supervised the making of the shrine in the years 1264-1267. The young Arnolfo di Cambio and Fra Guglielmo executed much of the work. We do not know what the shrine originally looked like, however. It might be that the St Michael and St Gabriel belonged to a different ensemble, possibly a pulpit. At the time of their acquisition, John Charles Robinson stated that they came ‘from a church in the neighbourhood of Pisa’.

These objects are of historical significance both because of their rarity and quality. Examples of Tuscan carving of this period outside Italy, especially ones which have formed part of a larger architectural scheme, are rare. The quality of carving displayed (as discussed in the Curator's Comments) is also, in some parts, of very high quality. Being able to look at the objects as sparate entities enables the viewer to gain unique insight into the way they were carved. It is possible to see clearly the drill holes and carving techniques employed at the time. They are also important in trying to establish the cannon of Tuscan sculpture carving. Although they have been hotly debated since their arrival in the museum, with differing attributions, it is clear that they are connected to the workshop of Nicola Pisano and are useful in the discussion of the different hands in that workshop and its possible output. 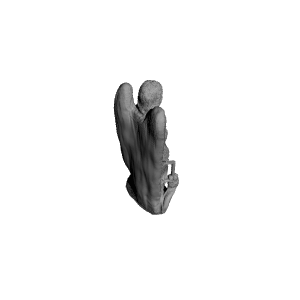