When the bronze original was discovered in the sea it held nothing in its raised right hand. Thus, we cannot know whether it shows the sea god Poseidon, who would be holding a trident, or Zeus, ruler of the gods, brandishing his thunderbolt. The figure is a prime example of the stringent classical style that marks the transition from Archaic stiffness with its familiar stereotypical smile towards a greater range of expression, as is evident here where we see the body captured at the moment before the deity’s anger and strength is released in his throw.

This figure, alongside several other works from the Royal Cast Collections, were given as a gift to theCAFA art academy in Beijing in 2008 to replace the figures that had been smashed during the cultural revolution of the 1960s. The casts have been used in drawing classes at the academy, a tradition that continues in China and Japan long after it has disappeared in Europe.

This is a 3D scan of a plaster cast of the sculpture ‘Zeus or Poseidon from the Artemision’ dated circa 460-450 BCE.

The scan is made from the cast (ref. KAS2100) in The Royal Cast Collection at SMK – National Gallery of Denmark. 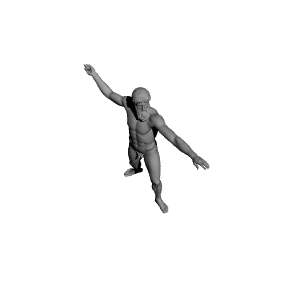 ×
18 collections where you can find Artemision Zeus by SMK - Statens Museum for Kunst
×
Jerry Fisher
@jerry7171
4
Printed on: Other
Material: PLA
Posted at: 07th January 2019

This is an 800mm print. I took the model and cut it apart with LuBan into printable blocks that would fit inside my printer. I printed this on a Creality Ender-2.

Here is my attempt to print a translucent 'Poseidon / Zeus of Cape Artemision'. The figure is only 100 mm high. Fingers and nose are borderline thin, also it does not stand by itself. PLA 'SUNLU' transparent, 195° C, 0.4 mm nozzle, 0.12 mm layer height, 5 wall lines, no infill,