3D
Scan The World
4,946 views 516 downloads
4 collections
Community Prints Add your picture
Be the first to share a picture of this printed object
0 comments

The subject of this enigmatic portrait is probably Constance, a daughter of the sculptor. A relief described as '"Constance" medallion' was exhibited by the sculptor at the Royal Academy in 1872. This work had been in the Westmacott family since it was made and was donated by the daughter of the sitter. James Sherwood Westmacott (1823 - 1900) was a member of the Westmacott dynasty of sculptors active in the late 18th and early 19th century, and carved several reliefs in this distinctive style. He was the son of the sculptor Henry Westmacott. Among his chief works are a 'Victory' statue at Dresden and a statue of 'Peri' and of 'Alfred the Great'. 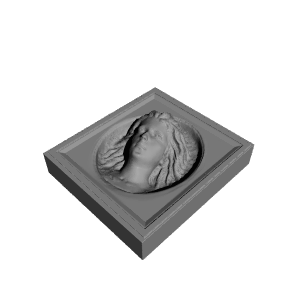 ×
4 collections where you can find The Artist's Daughter by vam