3D
Scan The World
3,943 views 197 downloads
2 collections
Community Prints Add your picture
Be the first to share a picture of this printed object
0 comments

These two striking marble lions, named after the sculptor to which the work was commissioned, André Beauneveu, were commissioned by King Charles V of France in 1364 to adorn the feet of his tomb.

In 1802, after the tomb was dismantled by the revolutionary government, the two lions were purchased by the antiquarian collector Sir Thomas Neave. Since then the lions were kept in the private collection of Neave's descendants before their discovery, proving to be a major discovery for scholars and collectors in the field of French gothic sculpture.

More information can be read from the Christies website. 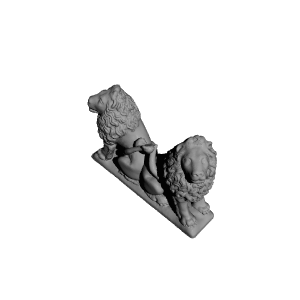