3D
Scan The World
3,747 views 145 downloads
Community Prints Add your picture
Be the first to share a picture of this printed object
0 comments

This is a plaster cast of the Belvedere Torso, a fragmentary marble statue of a nude male, known to be in Rome from the 1430s, and signed prominently on the front of the base by "Apollonios, son of Nestor, Athenian", who is unmentioned in ancient literature. It is now in the Museo Pio-Clementino (Inv. 1192) of the Vatican Museums.

The figure is portrayed seated on an animal hide, and its precise identification remains open to debate. Though traditionally identified as Heracles seated on the skin of the Nemean lion, recent studies[citation needed] have identified the skin like that of a panther, occasioning other identifications (possibilities include Hercules, Polyphemus and Marsyas, among others.) According to the Vatican Museum website "the most favoured hypothesis identifies it with Ajax, the son of Telamon, in the act of contemplating his suicide". 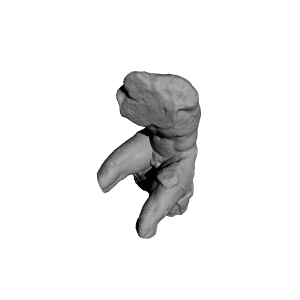