The Belvedere Torso at the Museo Pio-Clementino, Vatican

The Belvedere Torso at the Museo Pio-Clementino, Vatican

The Belvedere Torso is a fragment of a nude male statue, signed prominently on the front of the base by "Apollonios, son of Nestor, Athenian", who is unmentioned in ancient literature. It is now in the Museo Pio-Clementino (Inv. 1192) of the Vatican Museums. The figure has traditionally been identified as a Heracles, seated on an animal skin, though in recent studies, the skin has been identified as that of a panther, not the Nemean lion, occasioning other identifications.

It was once believed to be a 1st-century BC original, but is now believed to be a copy from the 1st century BC or AD of an older statue, which probably dated to the early 2nd century BC. The statue's figure is portrayed seated on an animal hide; the exact figure represented remains open to debate (possibilities include Hercules,Polyphemus and Marsyas, among others).

The contorted pose of the torso and musculature were highly influential on late Renaissance, Mannerist, and Baroque artists, including Michelangelo and Raphael. Michelangelo's admiration of the Torso was widely known in his lifetime, to the extent that the Torso gained the sobriquet, "The School of Michelangelo" 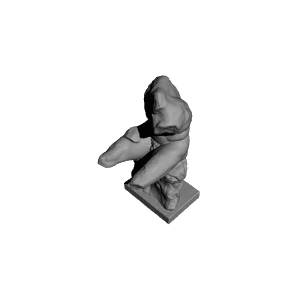 ×
5 collections where you can find The Belvedere Torso at the Museo Pio-Clementino, Vatican by Scan The World
×
Mitch Fournier
@MitchFournier
1
Printed on: Prusa i3 MK2 Kit
Material: PLA
Posted at: 25th September 2022