3D
Scan The World
3,423 views 572 downloads
3 collections
Community Prints Add your picture
Be the first to share a picture of this printed object
0 comments

This life-sized Black Bull has moved around quite a bit after first being modelled by Obadiah Pulham at Woodbridge in Suffolk, during the early 19th century. It was transported to London from the North Sea, by barge along the River Thames, to where it stood for nearly a century as the sign outside the ‘Black Bull Inn’ on the corner of Leather-lane and Holborn, until the inn was demolished in 1904. The Black Bull was saved from destruction by Sir William Bull, M. P for Hammersmith. It was taken for its next journey across London to King Street Hammersmith, where it stood guard above the entrance to the offices of Messrs. Bull & Bull, a firm of solicitors until that building too was demolished. It was then taken for another journey just a few hundred yards along King Street, to adorn the front of the Ravenscourt Arms pub, where it has stood ever since - without causing too much attention. 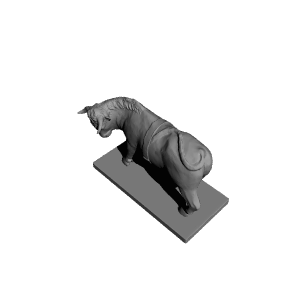