The Blond Negress at The MoMA, New York

3D
Scan The World
6,706 views 232 downloads
2 collections
Community Prints Add your picture
Be the first to share a picture of this printed object
0 comments

The Blond Negress at The MoMA, New York

Fusing the traditions of classical sculpture with Romanian, African, Egyptian, and, later, even industrial forms, Brancusi's groundbreaking works introduced abstraction and primitivism into sculptural practice. They were as important to the development of Modernism as the paintings of Pablo Picasso.

Brancusi's sculptural vocabulary consisted of relatively few highly distilled forms, one of the most significant being the ovoid or egg shape that is the basis for La Négress blonde. The title of the work makes reference to an African woman Brancusi had met in Marseilles. The perfect, upturned ovoid serves as the woman's head. Her distinguishing features are reduced to a pair of full lips, a chignon, and a zigzag ornament at the back of the neck, perhaps denoting a scarf or the lower part of her coiffure. The sculpture's pedestal comprises a cylinder, a Greek cross, and a plinth that can be read as the woman's body, shoulders, and neck. The bronze portion of the sculpture, however, can also be interpreted as the body of a golden fish, the top and rear embellishments becoming its dorsal and tail fins. The highly polished surface allows the viewer to contemplate the contrast between the simplicity of the sculpture and the complexity of his or her own reflection.

In attempting to capture the "essence of things," Brancusi broke with the Western tradition of representing the world in a realistic manner and paved the way for twentieth-century sculptural abstraction. His work was radical for its time, and when detractors refused to consider it art, his friend and peer Marcel Duchamp came to his defense, arguing, "To say that the sculpture of Brancusi is not art is like saying an egg is not an egg." Source: http://www.sfmoma.org/explore/collection/artwork/88#ixzz3fOCvk15i 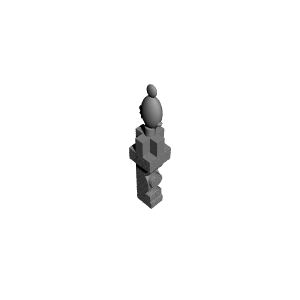 ×
2 collections where you can find The Blond Negress at The MoMA, New York by Scan The World