Beyond its collection of over 100 sculptures by Frederic Remington and Charles M. Russell, the Amon Carter Museum’s holdings of American sculpture include landmark works by such luminaries as Henry Kirke Brown, Daniel Chester French, Paul Manship, Elie Nadelman, and Augustus Saint-Gaudens. Among later twentieth-century artists represented are Alexander Calder, Robert Laurent, and Louise Nevelson.The Bronco Buster (also spelled "Broncho Buster" as per convention at the time of sculpting) is a sculpture made of bronze copyrighted in 1895 by American artist Frederic Remington. It portrays a rugged Western frontier cowboy character fighting to stay aboard a rearing, plunging bronco, with a stirrup swinging free, a quirt in one hand and a fistful of mane and reins in the other. It was the first and remains the most popular of all of Remington's sculptures. The sculpture was executed in the summer of 1895, and later that fall it was copyrighted with the United States Copyright Office. He took his subject from "A Pitching Bronco", an illustration of his that had been published in the April 30, 1892, issue of Harper's Weekly. Sculpting was a new medium for Remington at this time, and this new method of portrayal was a total success in the eyes of his collectors and art historians.[citation needed] Breaking away from the restricted limits of flat paper, pen and ink and watercolor; Remington moved to the next level of his artistic potential, through the more effective medium of three-dimensional expressions. Remington, who always strove to capture the essence of the moment in his work, now found he was more able to effectively express that which he had observed first hand:

With this in mind, he decided to sculpt a bucking bronco for his first piece. Using techniques from his previous works to help focus the subject's figure, Remington removed the figure from its context and isolated it into a grounded free-floating form, thus achieving a lifelike quality and vigorous movement. The artist's reference file for the sculpture included a photograph of a cowboy that very closely resembled his 1892 illustration of A Bucking Bronco. The Bronco Buster followed the same kind of process liberating horse and man from two-dimensionality as before. An original cast resides in the Oval Office, a gift of Miss Virginia Hatfield and Mrs. Louis Hatfield Stickney during the Carter Administration. Theodore Roosevelt's Rough Riders gave him a cast of The Bronco Buster, which is now at the Sagamore National Historic Site, Oyster Bay, New York. Another original Remington sculpture, The Cowboy, 1907, is located along Kelly Drive (formerly known as East River Drive) in Fairmount Park, Philadelphia. It is Remington's only commissioned sculpture and only monument, and a different sculpture from The Bronco Buster.

Support should be cleaned carefully, especially horse's legs can be broken while it is cleaning, enjoy your printing.. 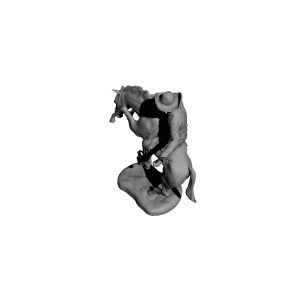 ×
16 collections where you can find The Broncho Buster at The Amon Carter Museum in Fort Worth, Texas by 3DLirious
×
Lo Rider
@l0rider
4
Printed on: Other
Material: PLA
Posted at: 06th July 2022

Printed on a modified Tronxy X5SA Pro. Printed in Comgrow PLA filament. Scaled to 250mm tall. Finshed with Sophisticated Finishes Blackened Bronze paint. This print was very challenging for me, but I'm very happy with how it turned out.