3D
360°
Featured Scan The World
3,091 views 410 downloads
1 collection
Community Prints Add your picture
Be the first to share a picture of this printed object
0 comments

This is one of two Roman bronze statues from the 1st Century BC, they are copies from 4th Century BC Greek figures of the same type (now lost). The works were discovered in the Villa of the Papyr in Ercolano and are now permanently housed in the National Archaeological Museum of Naples. The Villa of the Papyri was owned by Julius Caesar's father-in-law. It got its name from the discovery of a library of carbonized papyrus scrolls. The Villa housed eighty sculptures of magnificent quality.

In ancient Greece, runners competed in the 'stadion', the most prestigious event in the Olympic Games. The winner had the honour of giving his name to the Olympiad in which he triumphed, and to light the Olympic flame in the following games. The energy of the figure is apparent in the work, the eagerness in their golden eyes (not shown in this 3D model) propelling them into victory. The eyeballs were made of bone or ivory, the pupils of grey and black stone and were inserted separately to the main bronze body of the sculpture.

Astylos of Croton, Oebotas of Dyme and Cyclon of Athens are amongst the names of some of the athletes who have crossed the centuries and reached the present day. Could they be one of these energetic figures depicted?

Believed to have been sculpted by someone in the school of Lyssip. 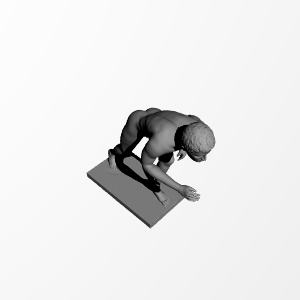