***Exclusive free file included with the purchase of an Elegoo Mars printer on MyMiniFactory.***

"Szygmünd was once a celebrated captain in the Imperial army. during the visit of a powerful neighboring diplomate, the Emperor held a vast banquet to honour them and welcome them into the Empire. The Imperial guard were on watch through the event, but the officers were invited to attend as guests and representatives of the Empire. As the evening progressed and the drinks began to flow, Szygmünd began to get into an argument with his commanding officer over which pie filling was the best! The argument got a bit out of hand and far more heated than a dispute over pies should ever have gotten and the situation ultimately ended with the commander unconscious with a pie tin conforming to the contours of his face! Szygmünd in a moment of clarity realised what he had done and made a swift dash to the window. He picked up a chair and hurled it through the glass and then leapt through behind it before sprinting to freedom, his own troops in pursuit to arrest him for assaulting an officer and causing public disturbance at a political feast. Facing military imprisonment for his actions, Szygmünd changed his appearance, removed all identifying marks from his armour and weapons and fled, taking up a new life as a Mercenary, seeking adventure, riches, but most importantly attempting to keep himself far away from the capital and out of an Imperial prison!" 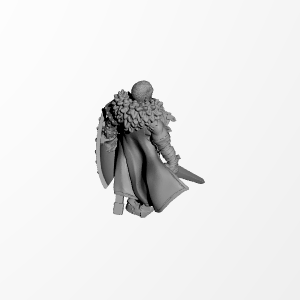 Some leg support issues, but got a clean print after a second try, printed a separate base to put him on I found on thingiverse. Primed and painted using standard warhammer supplies

Printed on a Dremel 3D40