The Captivity of Christ

3D
Scan The World
3,616 views 246 downloads
Community Prints Add your picture
Be the first to share a picture of this printed object
0 comments

The Captivity of Christ

In 1401, the Arte dei Mercantanti di Calimala (the guild of the merchants dealing in foreign cloth and exporting cloth) decided to commission a second bronze door for the Baptistry of Florence, to accompany the door completed by Andrea Pisano (about 1295-1348/9) in 1336. A competition was held for which seven entrants submitted trial reliefs of The Sacrifice of Isaac. Lorenzo Giberti's entry was chosen in preference to that of his nearest rival, Filippo Brunelleschi. On 23 November 1403, the contract for the door was allotted to Ghiberti and his father, Bartolo di Michele, and the door was executed between 1403 and 1424. The format was intended to harmonize with that of the earlier door, comprising a similar scheme of twenty-eight panels, each containing a quatre-foil. The twenty upper reliefs containing scenes from the New Testament, and the eight lower panels containing single figures of the Evangelists and Church Fathers, complement Andrea Pisano's scheme of twenty scenes from the life of St John the Baptist above eight figures of Virtues. Ghiberti slightly altered the proportions of the panels, and replaced Andrea Pisano's dividing lattice of studs and rosettes with a rich foliate ornament. On Easter Sunday (19 April) 1424, the doors were set up at the East entrance to the Baptistry, facing the Cathedral. In 1452, they were moved to their present location, the North Entrance, when they were supplanted by Ghiberti's second bronze door, the Gates of Paradise.

This original relief was from the north doors, which served as a votive offering to celebrate the sparing of Florence from relatively recent scourges such as the Black Death in 1348. Many artists competed for this commission and a jury selected seven semifinalists. These finalists include Lorenzo Ghiberti, Filippo Brunelleschi, Donatello and Jacopo della Quercia, with 21-year-old Ghiberti winning the commission. At the time of judging, only Ghiberti and Brunelleschi were finalists, and when the judges could not decide, they were assigned to work together on them. Brunelleschi's pride got in the way, and he went to Rome to study architecture leaving Ghiberti to work on the doors himself. Ghiberti's autobiography, however, claimed that he had won, "without a single dissenting voice." The original designs of The Sacrifice of Isaac by Ghiberti and Brunelleschi are on display in the museum of the Bargello.

It took Ghiberti 21 years to complete these doors. These gilded bronze doors consist of twenty-eight panels, with twenty panels depicting the life of Christ from the New Testament. The eight lower panels show the four evangelists and the Church Fathers Saint Ambrose, Saint Jerome, Saint Gregory and Saint Augustine. The panels are surrounded by a framework of foliage in the door case and gilded busts of prophets and sibyls at the intersections of the panels. Originally installed on the east side, in place of Pisano's doors, they were later moved to the north side. They are described by the art historian Antonio Paolucci as "the most important event in the history of Florentine art in the first quarter of the 15th century".

Good behavior in supports and bridging is required. Found that if printed vertically and upside down, you need to place a lot less supports. 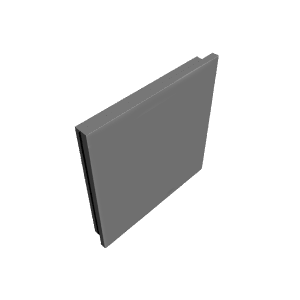