The Cardinal Richelieu at The Louvre, Paris

3D
Scan The World
4,037 views 308 downloads
Community Prints Add your picture
Be the first to share a picture of this printed object
0 comments

The Cardinal Richelieu at The Louvre, Paris

The Cardinal de Richelieu, Louis XIII's chief minister, is represented as a prelate, displaying the Order of the Saint-Esprit. This bust was commissioned from the renowned sculptor Bernini (a protégé of Pope Urban VIII), who was then at the height of his fame. The sculptor endowed the figure with an appropriately grave and noble air, and subtly modeled the folds of his clothing.

Richelieu wanted to commission a full size statue from Bernini in 1640. Negotiations were entrusted to Mazarin, the cardinal's close collaborator (and future successor) and the Marshal d'Estrée, French ambassador to Rome; they needed to obtain the agreement not only of the artist but also of his exclusive patrons, Cardinal Antonio Barberini and his uncle, Pope Urban VIII. As the pope expressed reluctance regarding the project for a full size statue, Bernini proposed to begin with a bust. The full size statue was never produced.

The bust was started in November 1640, and completed in January 1641; in August it was taken to Paris. Mazarin thanked Cardinal Barberini warmly, praising both the sculptor and his work. In private, however, he confessed that the bust, although very fine, was not a very good likeness. No doubt Richelieu was not entirely satisfied either, as he commissioned another bust from French sculptor Jean Warin. 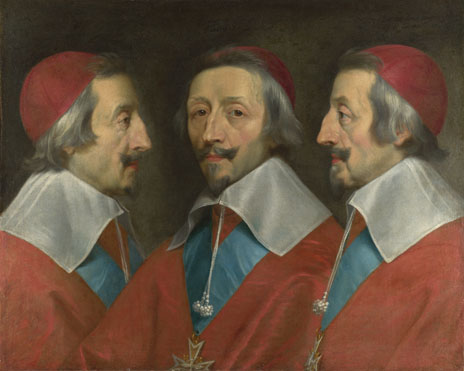 The sculptor did not know his model, so portraits and profiles of the cardinal were sent from Paris — no doubt the Triple Portrait of Cardinal de Richelieu by Philippe de Champaigne (London, National Gallery). Francesco Mocchi (1580–1654), another Italian sculptor, then used this painting to produce a statue of the cardinal for the Château de La Meilleraye in Poitou (vestiges in the museum at Niort).
Bernini had already proceeded in this manner in 1636 when he sculpted the bust of Charles I of England using the king's triple portait by Anton Van Dyck. The great French sculptor Coysevox followed suit in 1706 when he sculpted the bust of Marie Serre (Louvre) from a double portrait by Hyacinthe Rigaud.

All trace of the bust was lost in the late 17th century. It was inventoried at Notre-Dame in 1786 without the author's name, then entered the Musée des Monuments Français in 1795 as a work by Coysevox. Marcel Reymond re-established the sculptor's identity in 1910.
The work lacks the spirit of other busts by Bernini, being rather in the tradition of his noble, grave effigies of prelates or lawyers (such as that of Pedro de Foix Montoya). Austere and aloof, with thin face, high forehead, and pinched lips, Richelieu has a keen, tense expression. The half-torso representation and outline of the bust are characteristic of the sculptor, as is the treatment of the hair, which was sculpted in fine parallel waves before the locks were separated to add an effect of lightness. The artist's style is also apparent in his subtle modeling of the folds of the clothing, which renders the rustle of silk to perfection.

Easy print with many supports. 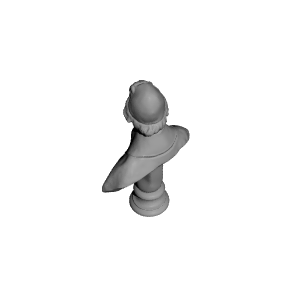 ×
0 collections where you can find The Cardinal Richelieu at The Louvre, Paris by Scan The World