This statue represents one of the daughters of Niobe as she attempts to escape from the arrows of Apollo and Artemis. The myth, in fact, tells how Niobe, Queen of Thebes, had 14 children, seven boys and seven girls, and for this considered herself to be superior to Leto, who had only been able to bear Zeus two children, Apollo and Artemis.

These two gods undertake to punish Niobe for offending their mother and they kill all of Niobe's children with arrows, Apollo killing the males and Artemis killing the females. This figure is probably a copy from the age of Hadrian which was perhaps part of a group sculpture featuring all of the Niobids. Different versions of this group are known, all of which are copies of a group dating from the Hellenistic period, the most complete of which is to be found in the Uffizi Galleries in Florence. This work was found around the middle of the 1500s at Hadrian's Villa near Tivoli during the excavations organised by Cardinal Ippolito d'Este.

This cast from The Statens Museum for Kunst originates from that of the Vatican's Copy, and fused with a head from another copy of the Florence type (KAS 568b, also on Scan the World). 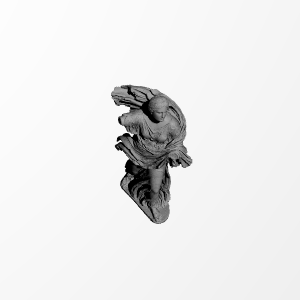 Scaled it up to 300% and cut the model in two, just above the knees, so that the bottom part could be printed without supports. Top part was printed with supports, which took quite a lot of effort to remove. I used a 0.6mm nozzle, 0.3mm layer height and the filament was Eryone marble PLA.