The Child Oedipus Revived by the Shepherd Phorbas

3D
Scan The World
1,159 views 168 downloads
5 collections
Community Prints Add your picture
Be the first to share a picture of this printed object
0 comments

The Child Oedipus Revived by the Shepherd Phorbas

In Greek mythology, Laius, King of Thebes, was warned by an oracle that his own son would kill him; he therefore ordered one of his officiers to kill the baby Oedipus, who was hung from a tree by his ankles and left to die.
Here, the shepherd Phorbas has just untied the baby and is attempting to revived him. According to legend, Oedipus was later adopted by King Polybus of Corinth and grew up to fulfill his destiny.
This sculpture group is a major example of neoclassical French sculpture. It is both monumental and delicate thanks to the contrast between the small, inert body of the baby and the shepherd's athletic frame, and to the presence of picturesque details such as the dog licking the child's feet. 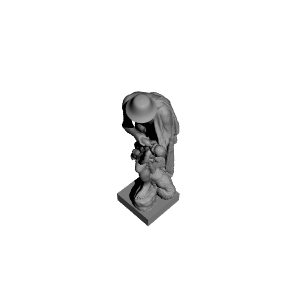