3D
Scan The World
3,996 views 162 downloads
2 collections
Community Prints Add your picture
Be the first to share a picture of this printed object
2 comments

**Textured Model of this Kore is available upon request**

Greece, c. 500 BC. Reconstruction of the polychromy on a 3D-print (PMMA), natural pigment in egg-casein tempera (marble original, Athen Akropolismuseum).

Kore (Greek: κόρη "maiden"; plural korai) is the modern term given to a type of free-standing ancient Greek sculpture of the Archaic period depicting female figures, always of a young age. Kouroi are the youthful male equivalent of kore statues.

Korai show the restrained "archaic smile," which did not demonstrate emotion. It was the symbol of the ideal, transcending above the hardships of the world. Unlike the nude kouroi, korai are depicted in thick and sometimes elaborate drapery. As fashioned changed, so did the type of clothing they wore. Over time, korai went from the heavy peplos to lighter garments such as the chiton. Their posture is rigid and column-like, sometimes with an extended arm. Some korai were painted colorfully to enhance the visual impact of the garments and narrative purposes.

There are multiple theories on whether the korai represent mortals or deities. Korai also functioned as offerings to the gods or the dead. 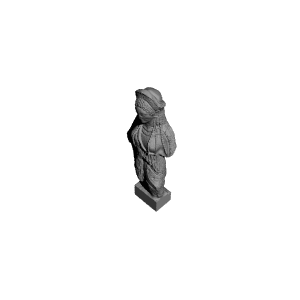