The Renaissance genius Michelangelo was an outstanding architect and poet, as well as the creator of the celebrated frescoes in the Vatican's Sistine Chapel. But his chief calling was undoubtedly sculpture. The conception of the crouching child is heavily connected with Michelangelo's work on the Medici Chapel - the family sepulchre of the rulers of Florence.

The view of the sculpture from the side especially brings out the physical power of the youth: the strong muscular legs, the tense arch of the curved back, the precisely indicated relief of the muscles.

He belongs to the same race of titans as the famous David that the master created in his younger years. But in contrast to the Old Testament hero proudly towering above the enemy, this young man seems to be constrained by some invisible force, bowed down with his head lowered. The boy's focus is to tend to his injured foot, perhaps an interpretation of the Spinario (thorn puller); oblivious to all that is going on around him, contributing to the sense of sorrow and pain that the piece evokes.

With this, the work remains enigmatic. Some scholars have seen the piece as a representation of the unborn soul, others as a wounded soldier. Still others interpret the "Crouching Boy" as the personification of suffering or mourning.

The Crouching Boy was created in the 1530s soon after the grave events that had shaken Italy: the sacking of Rome by the forced of Emperor Charles V, the fall of the republic and the restoration of the Medici tyranny in Florence. Tragic timesappeared at the time in Michelangelo's works. His manner became ever more expressive. All over the rather rough surface of the marble can we see traces of the chisel; the face, hands and feet are only cursorily indicated. Some people are of the opinion that the sculpture is unfinished. It is a fact, however, that such incompleteness was a deliberate technique in Michelangelo's late work, after pioneered by Donatello - one of the many innovations with which he enriched the language of sculpture.

In his preparatory sketch of a double wall romb for Lorenzo de' Medici and his brother Giuliano de' Medici, Michelangelo included two such crouching figures. It would have been appropriate for a work like the “Crouching Boy”, with its sense of hunched sorrow, to have had a place in such a scheme but the two crouching boys were not included in his final design for the project. 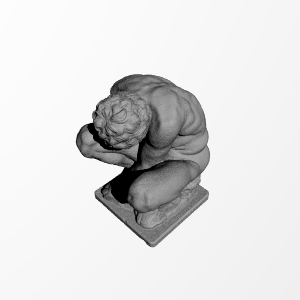 ×
12 collections where you can find The Crouching Boy by SMK - Statens Museum for Kunst
×
David Scott
@Critters
0
Printed on: Prusa i3 MK3
Material: PLA
Posted at: 13th November 2019

Tried a novel angle to reduce supports on face and front.

Printed on the Craftbot +, sliced with Simplify 3D. 190mm tall finished in Bronze with a Verdigris