3D
Scan The World
3,407 views 206 downloads
3 collections
Community Prints Add your picture
Be the first to share a picture of this printed object
0 comments

This sculpture is a head-portrait of the Cyclops Polyphemus, a famous mythical character featured in the Homer's Odyssey.

Odysseus and his men then sail through the murky night to the land of the Cyclopes, a rough and uncivilized race of one-eyed giants. After making a meal of wild goats captured on an island offshore, they cross to the mainland. There they immediately come upon a cave full of sheep and crates of milk and cheese. The men advise Odysseus to snatch some of the food and hurry off, but, to his and his crew’s detriment, he decides to linger. The cave’s inhabitant soon returns—it is the Cyclops Polyphemus, the son of Poseidon. Polyphemus makes a show of hospitality at first, but he soon turns hostile. He devours two of Odysseus’s men on the spot and imprisons Odysseus and the rest in his cave for future meals.

Odysseus wants to take his sword to Polyphemus right then, but he knows that only Polyphemus is strong enough to move the rock that he has placed across the door of his cave. Odysseus thus devises and executes a plan. The next day, while Polyphemus is outside pasturing his sheep, Odysseus finds a wooden staff in the cave and hardens it in the fire. When Polyphemus returns, Odysseus gets him drunk on wine that he brought along from the ship. Feeling jovial, Polyphemus asks Odysseus his name. Odysseus replies that his name is “Nobody”. As soon as Polyphemus collapses with intoxication, Odysseus and a select group of his men drive the red-hot staff into his eye. Polyphemus wakes with a shriek, and his neighbours come to see what is wrong, but they leave as soon as he calls out, “Nobody’s killing me”. When morning comes, Odysseus and his men escape from the cave, unseen by the blind Polyphemus, by clinging to the bellies of the monster’s sheep as they go out to graze. 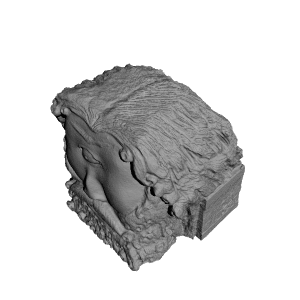