Bissen made this sculpture as a tribute to Danish soldiers who fought in the war of 1848-51, where the Danish government succeeded in preventing the Dukes Schleswig and Holstein from separating the kingdom. The sculpture originates from the same political movement as the Danish landscape painting of the period and is carried by the same national enthusiasm.

It was the first time in European history that a monument of victory was erected, showing neither a goddess of victory, an army commander or a monarch, but an anonymous civilian who fought in the war on the battlefield. With this said though, the figure's face bears a striking resemblance to the painter Johan Thomas Lundbye, who fell in the war. This sculpture is a draft of the Victory Monument, which was created in memory of the Battle of Fredericia in 1849 and erected in Fredericia in 1858. 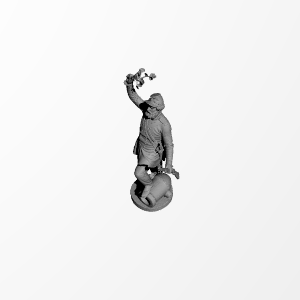 ×
11 collections where you can find The Danish soldier after victory by SMK - Statens Museum for Kunst
×
Maestro Craft
@Maestro Craft
1
Printed on: Creality Ender 3
Material: PLA
Posted at: 08th March 2020