"I'm Gotham's reckoning, here to end the borrowed time you've all been living on." said Bane to John Daggett before killing him.

Bane was the friend and protector of Talia al Ghul and the field commander of the League of Shadows. He was potent in both strategy and physical combat. He defeated the Batman in combat and manipulated the citizens of Gotham City with skilled oratory until Batman's recovery and return. He displayed his personality predominantly through expressions in his eyes. Bane's physical appearance was defined by his mask, which inhibited the excruciating pain that agonized his body to bearable levels. He was portrayed by Tom Hardy in The Dark Knight Rises.

This is my personal tribute to the super hero. See it as an excercise of fine art, inspired by the movie.

I used a lot of reference from the movie costum<sanstyle="font-size: 8.5pt; font-family: Verdana, sans-serif; color: #1f497d;">es for the texture on the cloth was made with the surface noise mode in zbrush. I had to unwrap the model correctly so the tile would look good even on the print. I hope you like it! 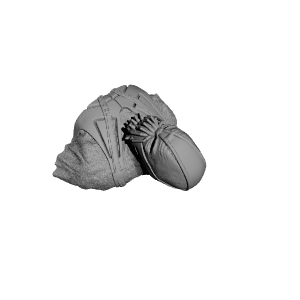 Printed this on Saturday