Death and the Mother at The Ny Carlsberg Glyptotek, Copenhagen

3D
Scan The World
8,006 views 758 downloads
7 collections
Community Prints Add your picture
Be the first to share a picture of this printed object
0 comments

Death and the Mother at The Ny Carlsberg Glyptotek, Copenhagen

Death and the Mother (Danish: Døden og moderen) is a sculpture created by the Danish sculptor Niels Hansen Jacobsen. Inspired by Hans Christian Andersen's taleThe Story of a Mother, it depicts a Grim Reaper figure, in a dynamic pose, carrying ascythe, striding over a mother with a dead child crouching on the ground. The original plaster model is in the holdings of the Danish National Gallery while two bronze castings are located outside St. Peter's Church in Copenhagen and Vejen Art Museum.

The original plaster model was created in 1892, shortly after Hansen Jacobsen had settled in Paris where he lived until 1901. His newly wedded wife Gabriela served as model for the mother crouching on the ground. The literary inspiration for the work wasHans Christian Andersen's tale The Story of a Mother. When the sculpture was exhibited at Charlottenborg in 1894, the catalogue contained a slightly modified version of the last sentence of the tale: "And she lowered her head into her lap. And Death took her child into the Unknown Lands".

The model was first exhibited at the Société Nationale des Beaux-Arts in Paris where it was well received. The next year it was exhibited at Charlottenborg and in 1899 Hansen Jacobsen gave the model to the Danish National Gallery. 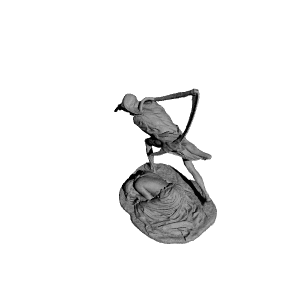 ×
7 collections where you can find Death and the Mother at The Ny Carlsberg Glyptotek, Copenhagen by geoffrey.marchal