The Death of Socrates

The Death of Socrates

Socrates died 2,412 years ago by drinking hemlock. He was hero to Marc which is why he did a representation of his death. The account of the trial that lead to his death sentence is famously documented by Plato in the Apologyand also by Xenophon in his Apology. In the introduction to Xenophon’s two works, Raymond Larson tells us that Plato’s account of the trial was probably first hand, whereas Xenophon’s account was through the secondary source of a mutual friend of Socrates, Plato and Xenophon, a man named Hermogenes. Although the two accounts differ in certain respects, when combined, they offer the only historical records of the trial. For this paper we’ll focus on the relevance of death and how mortality relates to the philosophy of Socrates.

The way we understand Socrates is by knowing that he died doing philosophy. He was officially charged with impiety and for corrupting the youth of Athens. But, it was also because he was making himself known by calling into question the widely held beliefs of those who would be offended when shown their opinions were wrong. The emphasis here will not be to focus on the charges or the trial outright, instead we will look at the attitude Socrates takes toward death itself in the two Apologies and how his unique way of contending and discussing death philosophically expands our own concepts surrounding end-of-life matters. It is in the extraordinary way in which Socrates eloquently speaks of death that inspires readers with his courage, fortitude and wisdom. He was willing to die for his cause, rather then to live into old age with compromise.

As we all know Plato’s Apology is replete with references to death, probably because Socrates knew that he’d be given the death sentence. Not only does he seem to know that his death was immanent, but he extends the meaning of it to demonstrate that the fear of death is comparable to ignorance.

For the fear of death, men, is in fact nothing other than to seem wise, but to not be so. For it is to seem to know what one does not know: no one knows whether death does not even happen to be the greatest of all goods for the human being; but people fear it as though they knew well that it is the greatest of evils.

Printed at 0.15 mm layer height with white PLA from Real 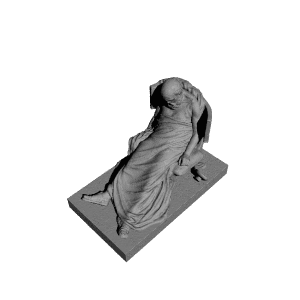 ×
0 collections where you can find The Death of Socrates by Scan The World
×
Gerd Riesenhuber
@rieses3d
1
Printed on: Other
Material: Resin
Posted at: 05th December 2020