The Dog of Alcibiades

The Dog of Alcibiades

The Dog of Alcibiades (also known as The Jennings Dog after it was appropriated by Henry Hostantine Jennings). The dog depicted, standing at 1.05m in height, is a 2nd Century AD Roman copy of a Hellenistic bronze original. Its leonine muzzle and one leg have been repaired since its rediscovery. Though it is one of only a few animal sculptures surviving from antiquity, a pair of similar marble mastiffs of the same model can be seen in the Belvedere Court of the Vatican Museums.

It is identified at the British Museum as a Molossian guard dog. The Molossian breed was native to Epirus in northwestern Greece, which was sacked by Rome in 168 BC, so it is assumed to have been associated with some civic monument in Epirus, and to have been brought to Rome. Pliny mentions a highly valued bronze dog surviving in Rome into his lifetime, before being lost in 69 AD:

... our own generation saw on the Capitol, before it went up in flames burnt at the hands of the adherents of Vitellius, in the shrine of Juno, a bronze figure of a hound licking its wound, the miraculous excellence and absolute truth to life of which is shown not only by the fact of its dedication in that place but also by the method taken for insuring it; for as no sum of money seemed to equal its value, the government enacted that its custodians should be answerable for its safety with their lives.

A story in Plutarch's life of Alcibiades tells of the statesman owning a large, handsome dog whose tail Alcibiades cut off so as to invoke pity from the Athenians and distract them from his worse deeds. The broken tail of this sculpture led Jennings to link it to this story, calling it "the dog of Alcibiades"; under this title a pair of copies[9] in Portland stone were installed by Robert Adam at Newby Hall, Yorkshire, about 1780, and in the later 19th century a pair in cast stone were set in the gardens at Basildon Park, Bedfordshire. A 19th-century pair carved in serpentine were sold by Bonham's, London, in 2005. 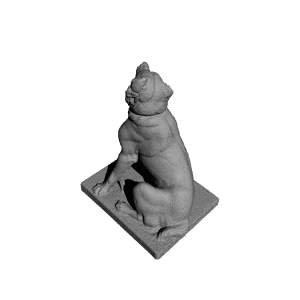 ×
12 collections where you can find The Dog of Alcibiades by Scan The World
×
Charles Sprocket
@Gimpyt
5
Printed on: Tevo Tarantula
Material: PLA
Posted at: 17th October 2017