The Drunken Faun is possibly John Hogan's masterpiece. It was executed in Rome, in response to a challenge made by John Gibson RA (1790-1866), a fellow sculptor, that no new original pose was possible. In spite of being based somewhat on the Barberini Faun, Hogan's sculpture soundly disproves Gibson’s assertion.

John Hogan (1800-1858) was born in Tallow, County Waterford, Ireland. Encouraged to travel to Rome by the art critic and engraver William Paulet Carey (1759-1839), Hogan was later elected as one of the Virtuosi al Pantheon. Bertel Thorvaldsen (1770-1844) described him as 'the best sculptor I leave after me in Rome.' 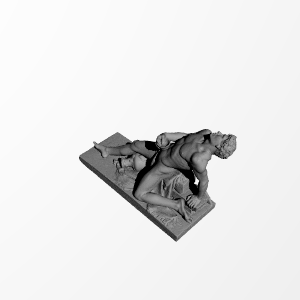 ×
3 collections where you can find The Drunken Faun by CrawfordArtGallery
×
Philippe Barreaud
@philippeb66
1
Printed on: Sindoh 3DWOX 1
Material: PLA
Posted at: 30th June 2022