The Dying Gladiator in Ghent, Belgium

3D
Scan The World
4,597 views 355 downloads
4 collections
Community Prints Add your picture
Be the first to share a picture of this printed object
0 comments

The Dying Gladiator in Ghent, Belgium

This park was built in 1875 on the site of an earlier Dutch citadel of Ghent, built between 1819 and 1831. The land was purchased in 1870 to 1871 by the then Mayor Charles de Kerchove de Denterghem. The citadel, one of the largest and most modern of its time in Europe and later used as infantry and artillery barracks, remained operational until 1870. The park was redeveloped in 1913 and there were buildings to house the Great Exhibition of 1913. In 1930 the appearance of the park changed again, this time in connection with the centenary of Belgium's independence. Under the park, which is situated next to the Leopold barracks, was in a bunker built in 1938 in the run-up to World War II, but it was not ready when the Germans invaded the country.

Since 1984, the park is a protected landscape. In the construction of the park was used the existing natural slopes and relics of the old citadel. Here and there are some parts of the painstakingly demolished bunkers found. 780 trees, including some rare ones, are an additional attraction. The botanical garden of the university and the campus Training lie on the outskirts of the Citadel Park." 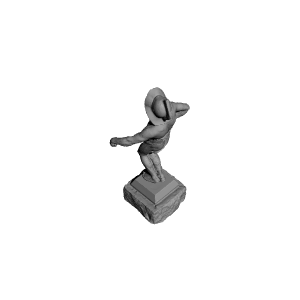 ×
4 collections where you can find The Dying Gladiator in Ghent, Belgium by Scan The World