The Dying Seneca or Borghese Fisherman

3D
Featured Scan The World
4,532 views 440 downloads
2 collections
Community Prints Add your picture
Be the first to share a picture of this printed object
0 comments

The Dying Seneca or Borghese Fisherman

This plaster cast originates from an original Roman copy of the 2nd century after a Hellenistic original found in Rome, known as either The Dying Seneca or Borghese Fisherman. The history of the statue is not well documented, though it is mentioned in the collection of Cardinal Altemps in 1599 before being acquired by the Cardinal Scipione Borghese.

The figure probably represents an angler, a statue type first created in the Hellenistic period. Heavily restored and placed in a blood-red basin, it was ultimately identified with Emperor Nero's tutor, Seneca, who was later ordered to kill himself for conspiring to assassinate him. The statue was famous in its time and featured as the subject of a reinterpretation of Seneca's dead in Rubens painting "The Death of Seneca). Seneca was considered one of the most important Roman writers, and as a philosopher on the same level as Plato and Aristotole, so there was the expecation that there would have been a lot of statues of him in anceint Rome. The legs of this statue end abruptly at mid-thigh, probably to represent a man standing in water - Seneca killed himself in a bath-tub.

This identification has since been disputed as, in 1813, a double Herma of Seneca and Socrates was discovered, suggesting that this statue was not of the stoic philosopher. it is now commonly known as the Old Fisherman, or Borghese Fisherman. 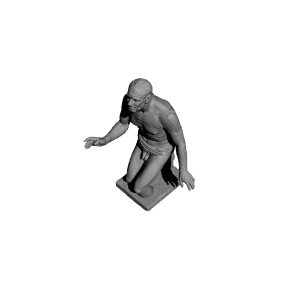