The Echo at The Fine Arts Museum in Ghent, Belgium

3D
Scan The World
3,084 views 144 downloads
Community Prints Add your picture
Be the first to share a picture of this printed object
0 comments

The Echo at The Fine Arts Museum in Ghent, Belgium

Born in Mechelen, a famous centre for furniture making, Wijnants began his career in this local industry. Furnished with this foundation in carving, he followed his ambition to become an independent artist by enrolling in the Mechelen Academy of Fine Art and later in the Brussels Academy where he studied under Charles Van der Stappen.  At the 1913 World Fair in Ghent Wijnants exhibited Echo, his first work to show a truly original style which combines something of the modernism of George Minne with a delicacy of line and concentration on the feminine beauty of his model.  This genre continued with the series of nudes he made for Frédéric Speth in which the range of his inspiration from classical Greek sculpture to European Gothic becomes ever more apparent.  Through the 1920s and 1930s Wijnants established himself as one of the prime exponents of Belgian sculpture, leading to teaching positions in Antwerp, and, in 1938, was awarded the State prize for Sculpture and the Plastic Arts.

Layer Thickness 150 microns. InFill 10%. The object was turned in height and reduced to 50%. 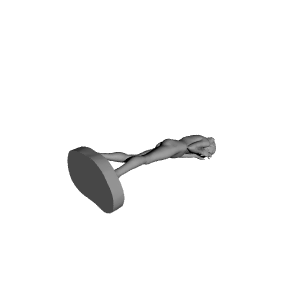 ×
0 collections where you can find The Echo at The Fine Arts Museum in Ghent, Belgium by Scan The World