James Earle Fraser's End of the Trail is one of the most iconic works featured in The American West in Bronze, 1850–1925. First modeled in 1894, the sculpture is based on Fraser's experiences growing up in Dakota Territory; as he wrote in his memoirs, "as a boy, I remembered an old Dakota trapper saying, 'The Indians will someday be pushed into the Pacific Ocean.'" The artist later said that, "the idea occurred to me of making an Indian which represented his race reaching the end of the trail, at the edge of the Pacific." In 1915, Fraser displayed amonumental plaster version of the work at the Panama-Pacific International Exposition in San Francisco, earning popular acclaim and a gold medal.

Within a few months, thousands of prints and photographs of the statue were sold, and in 1918 Fraser began producing bronze reductions of the sculpture in two sizes. Today, an online image search for "End of the Trail" returns tens of thousands of results, as the work has been endlessly reproduced in paintings and in prints, on posters, T-shirts, pins, bags, belt buckles, and bookends. It was even featured on the cover of The Beach Boys 1971 album Surf's Up. Despite its appeal as a popular American icon, Fraser intended the work as a pointed commentary on the damaging effects of Euro-American settlement on American Indian nations confined on government reservations. Seated upon a windblown horse, Fraser's figure slumps over despondently, embodying the physical exhaustion and suffering of a people forcefully driven to the end of the trail.

Fraser's sculpture has been interpreted in various ways: while some critics regarded the Indian's decline as a necessary step in America's westward "march of progress," others have viewed the work as a remorseful indictment of "the national stupidity that has greedily and cruelly destroyed a race of people possessing imagination, integrity, fidelity and nobility," as an unnamed critic wrote in Touchstone in 1920. The sculpture continues to resonate with audiences in the twenty-first century, taking on new meanings and new forms in the digital age. I spoke with contemporary painter and sculptor Jeffrey Gibson about Fraser's End of the Trail, a work he describes as "having a very ambivalent relationship with over the years." Born in Colorado Springs, Jeffrey is half Cherokee and a member of the Mississippi Band of Choctaw Indians. His American Indian heritage together with his formal training as an artist—at both the Art Institute of Chicago and the Royal College of Art in London—have shaped his perspective on this work of art.

Printed in FormFutura EasyFil White @ 215, heated bed @ 65, Med quality, 25% infill, custom support and raft settings. This may need custom support on the spear and riders feet, Beware of small thin parts during support removal, the spear in particular is very fragile. It may be idea to set the infill to 25-50%. 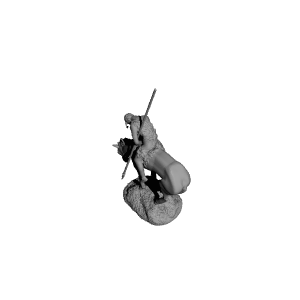 ×
18 collections where you can find The End of The Trail From the Rees-Jones Collection at The Amon Carter Museum in Fort Worth, Texas by 3DLirious
×
Rudolf Arendt
@Ruduster
3
Printed on: ELEGOO Mars Pro UV Photocuring LCD 3D Printer
Material: Resin
Posted at: 04th December 2020
Loading comments...