From the Greek point of view Ephesian Artemis is a distinctive form of their goddess Artemis. In Greek cult and myth, Artemis is the twin of Apollo, a virgin huntress who supplanted the Titan Selene as goddess of the Moon. At Ephesus, a goddess whom the Greeks associated with Artemis was venerated in an archaic, certainly pre-Hellenic cult image that was carved of wood and kept decorated with jewelry.

Robert Fleischer identified as decorations of the primitive xoanon the changeable features that since Minucius Felix and Jerome's Christian attacks on pagan popular religion had been read as many breasts or "eggs" — denoting her fertility (others interpret the objects to represent the testicles of sacrificed bulls that would have been strung on the image, with similar meaning). Most similar to Near-Eastern and Egyptian deities, and least similar to Greek ones, her body and legs are enclosed within a tapering pillar-like term, from which her feet protrude. On the coins minted at Ephesus, the apparently many-breasted goddess wears a mural crown (like a city's walls), an attribute of Cybele (see polos).

On the coins she rests either arm on a staff formed of entwined serpents or of a stack of ouroboroi, the eternal serpent with its tail in its mouth. Something the Lady of Ephesus had in common with Cybele was that each was served by temple holy, sacred women, or hierodules (hiero "holy, sacred ", doule "female assistant"), under the direction of a priestess who inherited her role, attended by a college of eunuch priests called "Megabyzoi" and also by young virgins (korai).

The "eggs" or "breasts" of the Lady of Ephesus, it now appears, must be the iconographic descendants of the amber gourd-shaped drops, elliptical in cross-section and drilled for hanging, that were rediscovered in the excavations of 1987-88; they remained in situ where the ancient wooden cult figure of the Lady of Ephesus had been caught by an 8th-century flood (see History above). This form of breast-jewelry, then, had already been developed by the Geometric Period. A hypothesis offered by Gerard Seiterle, that the objects in Classical representations represented bulls' scrotal sacs cannot be maintained.

A votive inscription mentioned by Florence Mary Bennett,[39] which dates probably from about the 3rd century BC, associates Ephesian Artemis with Crete: "To the Healer of diseases, to Apollo, Giver of Light to mortals, Eutyches has set up in votive offering [a statue of] the Cretan Lady of Ephesus, the Light-Bearer."

The Greek habits of syncretism assimilated all foreign gods under some form of the Olympian pantheon familiar to them— in interpretatio graeca— and it is clear that at Ephesus, the identification with Artemis that the Ionian settlers made of the "Lady of Ephesus" was slender. The Christian approach was at variance with the tolerant syncretistic approach of pagans to gods who were not theirs. A Christian inscription at Ephesus suggests why so little remains at the site:
"Destroying the delusive image of the demon Artemis, Demeas has erected this symbol of Truth, the God that drives away idols, and the Cross of priests, deathless and victorious sign of Christ."

The assertion that the Ephesians thought that their cult image had fallen from the sky, though it was a familiar origin-myth at other sites, is only known at Ephesus from Acts 19:35: "What man is there that knoweth not how that the city of the Ephesians is a worshipper of the great goddess Diana, and of the which fell down from Jupiter?"
Lynn LiDonnici observes that modern scholars are likely to be more concerned with origins of the Lady of Ephesus and her iconology than her adherents were at any point in time, and are prone to creating a synthetic account of the Lady of Ephesus by drawing together documentation that ranges over more than a millennium in its origins, creating a falsified, unitary picture, as of an unchanging icon.

The Temple of Artemis or Artemision (Greek: Ἀρτεμίσιον, Turkish: Artemis Tapınağı), also known less precisely as the Temple of Diana, was a Greek temple dedicated to the goddess Artemis. It was located in Ephesus (near the modern town of Selçuk in present-day Turkey). One of the Seven Wonders of the Ancient World, it was completely rebuilt three times before its final destruction in 401 AD. Only foundations and sculptural fragments of the latest of the temples at the site remain. 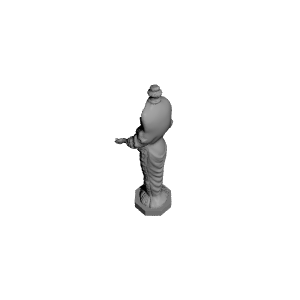 ×
0 collections where you can find The Ephesian Artemis by Scan The World
×
Louise Krasniewicz
@LouiseK
4
Printed on: MakerBot Replicator 2
Material: PLA
Posted at: 27th June 2022