The Erechtheion Caryatid Colonnade at The British Museum, London

3D
Scan The World
6,428 views 605 downloads
1 collection
Community Prints Add your picture
Be the first to share a picture of this printed object
3 comments

The Erechtheion Caryatid Colonnade at The British Museum, London

Caryatids are female figures serving as supports. The most likely derivation of their name is from the young women of Sparta who danced every year in honour of Artemis Karyatis ('Artemis of the Walnut Tree'). This is one of six caryatids that held up the roof of the temple on the Acropolis known as the Erechtheion. She wears apeplos, a simple tunic pinned on each shoulder. Her hair is braided and falls in a thick rope down her back. She probably held a sacrificial vessel in one of the missing hands.

The figure strongly resembles the women of the east frieze of the Parthenon, which had just been completed when work on the Erechtheion began. She carries an architectural capital like a basket on her head. From the side, her burden seems to bear down upon her; the weight is taken on the right leg, encased in perpendicular folds arranged like the fluting of a column shaft. The other leg is flexed with the drapery moulded to it.

Print upside down to reduce support! 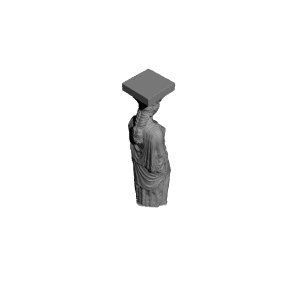 ×
1 collections where you can find The Erechtheion Caryatid Colonnade at The British Museum, London by Scan The World