The Falcon of the Plantagenets

3D
Scan The World
1,722 views 139 downloads
1 collection
Community Prints Add your picture
Be the first to share a picture of this printed object
0 comments

The Falcon of the Plantagenets

This sculpture depicts The Falcon of the Plantagenets, one of the Queen's Beasts.

The Falcon was first used by Edward III of the House of Plantagenet as his badge. It descended to Edward IV, who took it as his personal badge, the falcon being standing within an open fetter lock. Originally closed, the slightly open fetter lock is supposed to refer to the struggle Edward IV had to obtain the throne — "he forced the lock and won the throne. 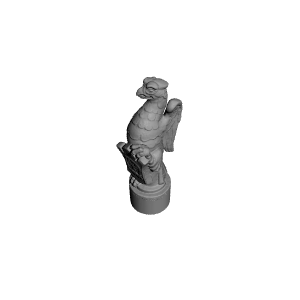