The Family at The Jardim de São Bento, Lisbon

The Family at The Jardim de São Bento, Lisbon

This family scene is a marble sculpture created by Leopoldo Neves de Almeida during his lifetime (18 October 1898 - 28 April 197). For over half a century of intense activity, Leopoldo de Almeida became a leading figure of the Portuguese sculpture of the twentieth century , and particularly one of the best expressions of official statuary modernizing implemented by the New State , and author of a vast work that includes portraits, busts, bas-reliefs, statues and monuments of figures of history and Portuguese culture, etc. This sculpture depicts a family scene, a male and a female holding a child together in their arms. There are two small birds infront of the figures. 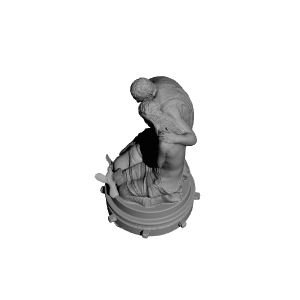 ×
3 collections where you can find The Family at The Jardim de São Bento, Lisbon by Scan The World
×
Eloy RICARDEZ
@rey_mezcal
1
Printed on: Prusa i3 MK3
Material: PLA
Posted at: 17th October 2021