3D
Scan The World
15,111 views 2,308 downloads
13 collections
Community Prints Add your picture
Be the first to share a picture of this printed object
0 comments

The Farnese Atlas is a 2nd-century Roman marble copy of a Hellenistic sculpture of Atlas kneeling with the celestial spheres, not a globe, weighing heavily on his shoulders. It is the oldest extant statue of the Titan of Greek mythology, who is represented in earlier vase-painting, and more important, the oldest known representation of the celestial sphere. The sculpture is at the National Archaeological Museum of Naples, in Italy. It stands seven feet (2.1 meters) tall, and the globe is 65 cm in diameter.

The name Farnese Atlas reflects its acquisition by Cardinal Alessandro Farnese in the early 16th century, and its subsequent exhibition in the Villa Farnese.

Atlas labors under the weight because he had been sentenced by Zeus to hold up the sky. The globe shows a depiction of the night sky as seen from outside the outermost celestial sphere, with low reliefs depicting 41 (some sources say 42) of the 48 classical Greek constellations distinguished by Ptolemy, including; Aries the ram, Cygnus the swan and Hercules the hero. The Farnese Atlas is the oldest surviving pictorial record of Western constellations. It dates to Roman times, around AD 150, but has long been presumed to represent constellations mapped in earlier Greek work.

A common misconception today is that Atlas was forced to hold the Earth on his shoulders, but Classical art shows Atlas holding the celestial spheres, not a globe; the solidity of the marble globe born by the renowned Farnese Atlas may have aided the conflation, reinforced in the 16th century by the developing usage of atlas to describe a corpus of terrestrial maps. 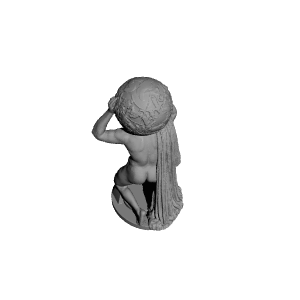 ×
13 collections where you can find The Farnese Atlas at The Museo Archeologico Nazionale, Naples by Scan The World