The Farnese Bull, also known as the Toro Farnese (IT) for the Tourment of Dirce, is a colossal Roman elaborated copy of a Hellenistic original group sculpture. It is the largest single sculpture yet discovered from antiquity, drawn by a single block of marble - though it was discovered in 1546 in fragments. The work was excavated at the gymnasium of the Roman Baths of Caracalla, commissioned by Pope Paul III in the hope of finding ancient sculptures to adorn the Palazzo Farnese. The sculpture is dated to the Severian period (A.D. 222-235). Unlike the discoveries of the Farnese Hercules and the Latin Hercules from this excavation the only reference to this grouping is from a 1595 engraving by Etienne du Perac of the ruins of the Baths, showing the end of the east palestra, which states:

"...in the time of Paul III many fragments of statues and animals were found that were all in one piece in antiquity... and Cardinal Farnese had [it] erected now in his Palazzo."

Pliny The Elder mentions what was presumably the prime version of it as the work of the Rhodian artists Apollonius of Tralles and his brother Tauriscus, stating that it was commissioned at the end of the 2nd century BCE. It was imported from Rhodes as part of the remarkable collection of artwork and sculpture owned by Asinius Pollio, a Roman politician who lived during the years between the Republic and the Principate.

Along with the rest of the Farnese antiquities, the sculpture has been part of the Museo Archeologico Nazionale Napoli in Naples (inv. no. 6002) since 1826. The sculpture has been restored numerous times, incorporating sixteenth, eighteenth and nineteenth century styles from differing qualities of marble, not necessarily true to the original composition. The group underwent a substantial restoration in the 16th century, when Michelangelo planned to use it for a fountain to be installed at the centre of a garden between the Palazzo Farnese and Villa Farnesia.

In 1883, the original sculpture was noted by Domenico Monaco, curator of the (then) National Museum in Naples, to have been carved from a block of marble measuring 3.66m x 2.75m. As it is today the sculpture weighs 21.8 tonnes.

The subject of this group represents the myth of Dirce from the Theban saga. She was tied to a wild bull by the sons of Antiope, Zethus and Amphion, who wanted to punish her for the ill-treatment influcted on their mother, first first of Lycus, King of Thebes. The bull dragged her to death and from her blood sprang the fountain of Thebes that is called by her name. The scene is full of terror and daring, and though wrought in the cool, snowy marble, it is quivering with intense passion and frenzied malice. It appears that at any minute the bull may break away and their vengeance be foiled. It is the supreme moment, when the struggles of the bull have reached their uttermost, when the strength of the men is put to its farthest limit, when the agonizing supplications of Dirce are heartrending, and when the pity of the mother, standing in the background, breaks through all restraint and beseeches her two sons to be merciful, that the sculptors have caught and imprisoned for us in gleaming stone.

When Antiope, who is represented by the female figure standing in the background with the long spear resting in her left hand and against her shoulder, had given birth to Amphion and Zethus, she was driven away from her father's house and had to abandon her sons. The boys were given over into the care of an old shepherd who brought them up without their having any knowledge of their mother. Antiope, deprived of her children, also suffered terrible wrongs at the hands of her relative Dirce. One day, wandering on Mt. Cythaeron, in wild bacchanalian revel, Dirce met the two young shepherds, who at once became fascinated with her. Thinking her power over them complete and appreciating their great strength, she bids them bind Antiope to a mad bull that she may be dragged to a cruel death. In company with Dirce, they seek Antiope, but recognize their mother before it is too late. Then they consign Dirce to the fate she had prepared for another. To further illustrate the myth, notice the work on the base of the statue. A small boy adorned with a wreath, a figure regarded by some as the mountain god Cythaeron, decked with Bacchic ivy, is placed beneath the left foot of Amphion, and beneath his right foot springs the lithe and graceful form of a shepherd dog, and leaning against the trunk of a tree are a thyrsus or wand and other symbols, while on the right side of the base are carved the figures of a sheep and goat. But all these minor details are far surpassed in interest and power by the principal figures and their action. Nothing in the whole realm of art can surpass the artistic refinement of its execution, the exquisite folds of the drapery, the strength yet graceful symmetry of the forms, and the vivid and overwhelming sense of life and agony which pervades it all. This type of bronze was very popular as country house furnishing, to complement decors and pictures, and to reflect the owner's educated taste for classical art. The sculpture is well made but indistinguishable. 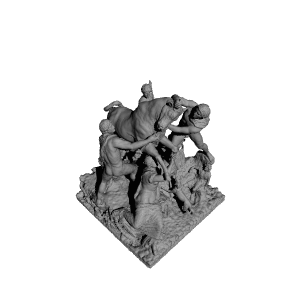 I'm fixing to print this dynamic sculpture next month. I'm going with a slightly more conservative 400mm, but it will still take a long time to print. Note the screenshot of the chopped up model.