3D
360°
Featured Scan The World
5,478 views 884 downloads
11 collections
Community Prints Add your picture
Be the first to share a picture of this printed object
0 comments

This copy was made in plaster before 1887, transferred from the Royal Academy of Art in 1896, and cast from a Roman copy of the 1st Century BC. The Roman copy is an interpretation of a now lost Greek original made around 440 BC between the Severe and Classical period.

Many copies of the Diadumenos exist though this, still a copy of Polykleitos, has its provenance from the Farnese collection and is now in The British Museum.

The Diadumenos ("diadem-bearer"), together with the Doryphoros (spear bearer), are two of the most famous figural types of the sculptor Polyclitus, forming a basic pattern of Ancient Greek sculpture that all present strictly idealised representations of young male athletes in a convincingly naturalistic manner.

The Diadumenos is the winner of an athletic contest at a games, still nude after the contest and lifting his arms to knot the diadem, a ribbon-band that identifies the winner and which in the bronze original of about 420 BCE would have been represented by a ribbon of bronze. The figure stands in contrapposto with his weight on his right foot, his left knee slightly bent and his head inclined slightly to the right, self-contained, seeming to be lost in thought. Phidias was credited with a statue of a victor at Olympia in the act of tying the fillet around his head; besides Polyclitus, his successors Lysippos and Scopas also created figures of this kind. 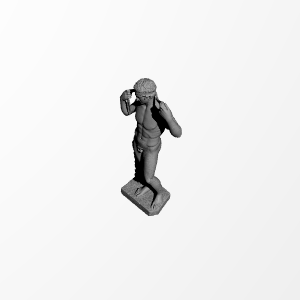