3D
360°
Scan The World
5,266 views 983 downloads
10 collections
Community Prints Add your picture
Be the first to share a picture of this printed object
0 comments

A faun was a creature of ancient mythology, a shepherd figure that was part human, part goat. In ecstatic intoxication, the fauns followed the wine-god Bacchus. In Sergel’s sculpture there is nothing at first glance to suggest that this is such a creature. The human body is realistically portrayed, but at the base of the spine a small goat’s tail can be seen. The Faun was the work that brought Sergel his breakthrough, and was carved when he was in Rome. It was made in two copies, of which this one became part of Gustav III’s collection. 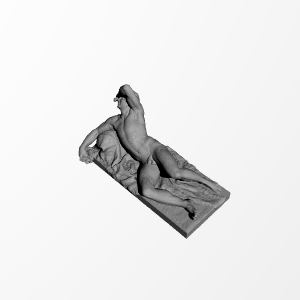 ×
10 collections where you can find The Faun by nationalmuseumswe