3D
Scan The World
5,272 views 315 downloads
2 collections
Community Prints Add your picture
Be the first to share a picture of this printed object
0 comments

This marble sculpture was completed in 1883 by Louis Ernest Barrias (Paris, 1841 - 1905). This group is inspired by the biblical scene of Adam and Eve carrying their child Abel who was murdered by the jealousy of his brother Cain. The winner of the Medal of Honour in 1878, the plaster sculpture is now considered, "The manifestation of the most high emotions achievable in sculpture". Fed formal references from Michelangelo and Bernini, Barrias however places the scene of bereavement and death in a fiction/fantasy setting. Adam holds a fierce face with the traits of an older man, hinting the first times of humanity. In contrast, the bodies of Eve and Abel appear similar to more antique models seen in the Renaissance.

The three people are united in a pyrimidal form in steps, which plays on the relationships between each body. With this imaginary reconstitution of the first realisation of death, Barrias creates some sort of original Pieta, a brilliant summary of neoclassical, romantic and realistic styles. 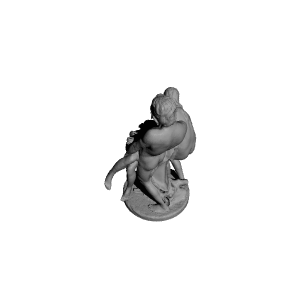 ×
2 collections where you can find The First Funerals at The Petit Palais, Louvre by Scan The World