The fool at the Jardin des Tuileries, Paris, France

3D
Scan The World
2,702 views 73 downloads
Community Prints Add your picture
Be the first to share a picture of this printed object
0 comments

The fool at the Jardin des Tuileries, Paris, France

The Crowd is the work of British sculptor Raymond Mason based in Paris. Created between 1963 and 1967, it was installed in 2000 in the gardens of the Tuileries. It is a bronze sculpture representing many personnages.

Raymond Grieg Mason OBE was a sculptor who trained at the Birmingham School of Arts and Crafts under William Bloye, the Royal College of Art (for one term), and Slade School of Art. He lived and worked in Paris beginning in 1946. He is known for his sculptures of tightly packed people made from clay, with works on McGill College Avenue in Montreal; the Tuileries, Paris; Georgetown, Washington, D.C.; and Madison Avenue, New York. His controversial 1991 work, Forward! in Birmingham's Centenary Square was destroyed by arson on 17 April 2003. The statue carried a reference to DNA ("the secret of life") in connection with Maurice Wilkins, who went to school in Birmingham and worked at the University of Birmingham. 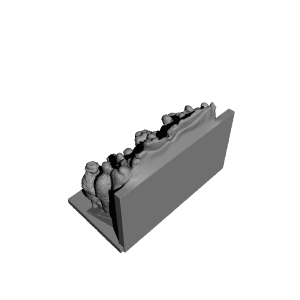 ×
0 collections where you can find The fool at the Jardin des Tuileries, Paris, France by Scan The World