3D
Scan The World
4,098 views 281 downloads
Community Prints Add your picture
Be the first to share a picture of this printed object
0 comments

This sculpture represents the Foreman, a very important character in Lithuanian art which mix together with russian and soviet ideology. Jouzas Kedainis and others Lithuanian artists immortalized the people who had worked at the University over the course of many centuries. During the period of the thaw, the more liberal politics that existed in the sphere of culture at that time appeared to permit the unfolding of culture, although creative freedom was ostensible. Artists who created occasional works of art were especially restricted. Dependant on the state commissions and state support they were forced to adapt themselves to soviet ideology. And yet, during the fifty years of the soviet ideology and official culture, the artists were able to create significant works that were dedicated to various historical dates or jubilees which enriched the national cultures and reflected the people's nationalist aspirations. 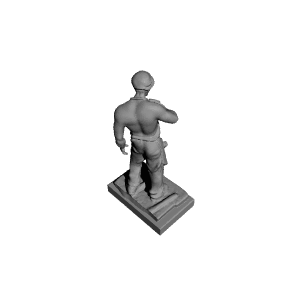