The Freed Man at The Amon Carter Museum in Fort Worth, Texas

3D
Scan The World
5,313 views 280 downloads
1 collection
Community Prints Add your picture
Be the first to share a picture of this printed object
0 comments

The Freed Man at The Amon Carter Museum in Fort Worth, Texas

Amon G. Carter’s personal collection of sculpture included over 100 works by Remington and Russell in materials ranging from bronze to wax and plaster. But in its first decade of operation the Carter actively began collecting a broader range of American sculpture. Today, the collection houses works by Alexander Calder, Augustus Saint-Gaudens, Elie Nadelman, Louise Nevelson, and Hiram Powers. Beyond its collection of over 100 sculptures by Frederic Remington and Charles M. Russell, the Amon Carter Museum’s holdings of American sculpture include landmark works by such luminaries as Henry Kirke Brown, Daniel Chester French, Paul Manship, Elie Nadelman, and Augustus Saint-Gaudens. Among later twentieth-century artists represented are Alexander Calder, Robert Laurent, and Louise Nevelson.

This piece is Ward’s depiction of a seminude African-American man, inspired by President Abraham Lincoln’s Emancipation Proclamation, issued on September 22, 1862. Contemporary appreciation for “The Freedman” arose from the desire for statuary that addressed current issues in straightforward terms rather than through allegories. The muscular figure was executed with remarkable attention to anatomical accuracy. The broken manacles on the former enslaved man’s left wrist and in his right hand offer a succinct commentary on the chief political and moral topic of the era and clearly proclaim Ward’s abolitionist sentiments.

Print this as large as possible to allow the detail of the chain links and fingers to come out. 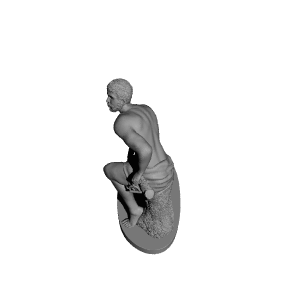 ×
1 collections where you can find The Freed Man at The Amon Carter Museum in Fort Worth, Texas by 3DLirious