This statue depicts two blindfolded youth, one crouching low behind the other figure who raises a sling.

In 17th century Italian courtly life the Gioco del Saccomazzone was a game played during the interludes of rustic dances. It involved two blindfolded men attempting to hit each other with a knotted cloth without lifting their left hands from an object in the middle of the room, while also shrieking imitations of bird cries. Orazio Mochi (1571-1625) originally conceived this comical composition in around 1620, and the small witty bronze of Saccomazzone Players was later enlarged to life-size pietra serena group for the Boboli Gardens by the sculptor Romolo Ferrucci del Tadda (c. 1550-1621).

Susini's statue is based on Mochi's design. He chose a very narrow oval plinth for his bronze cast, so the players' wild thrashing in the air is shown to better advantage. 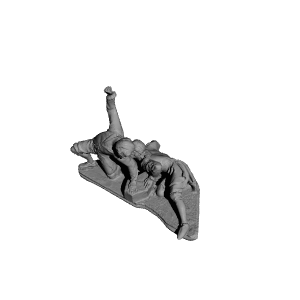 ×
0 collections where you can find The Game of Saccomazzone by Scan The World
×
Saeed Attia
@saeedattia
0
Printed on: Anet A8
Posted at: 26th October 2021
Loading comments...